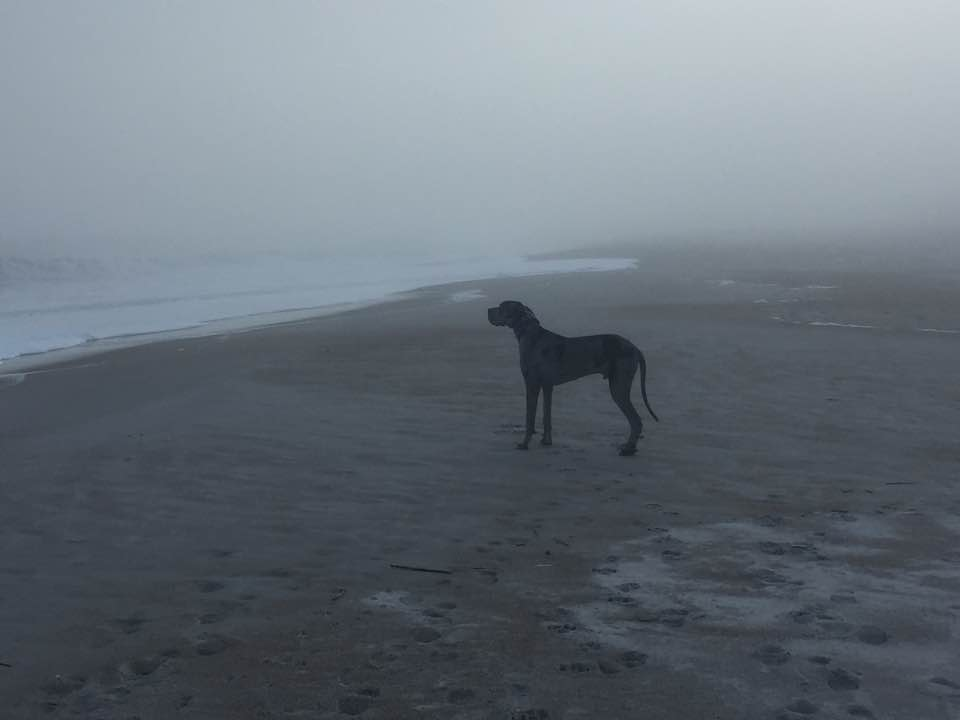 I chose a raw-boned, gusty day for a beach walk a few days ago. Summer beaches are festive and lighthearted – family gatherings, chubby-kneed little kids running squealing in and out of the crackling surf under the watchful eyes of their parents. Teenage boys being cool. Teenage girls in gaggles laughing and trying not to be too obvious watching the cool boys. Someone flying a kite. A group of men standing shoulder to shoulder on the sand, laughing and telling fishing lies while their wives sit in lounge chairs behind them sipping illicit wine coolers and rolling their eyes behind sunglasses. Sunburn and Coppertone and the fruity, tropical smell of surf wax. Sitting on a blanket nearby, a guy plucks an old Gibson guitar and draws an audience of admirers.

Mother Ocean laughs and smiles and bathes them in her warm breath and water.

A winter beach is different. I needed a walk on one a few days ago. I loaded our huge Great Dane, Harley, into the minivan and headed down the road a piece to my happy place, the spot along the beach where I’ve been hanging out since I was a little kid. I’m glad for the chill and the twenty-five knot north wind that roars in my ears when my face is due north into it. A summer beach won’t do on such a day.

On days like these, I go seeking the chilly, bare bone ruggedness without the crowds or laughter and smells of suntan lotion. I walk a couple of miles, Harley and me, and encounter less than a dozen people. We all give each other our space, each of us seeking the same thing – solitude. The wind turns the waves a muddy gray-green, shot through with white foam on every crest and in every cold trough. Piles of spartina wrack driven ashore by the relentless surf lay drying landward of it, smelling enticingly like hay cured in molasses.

Harley whines and frets because I wouldn’t throw his ball into the rough surf, so he contents himself chasing the scudding sea foam and attacking the spartina wrack.

The wind has scoured the sand into s-shaped rows that reminded me of Arabian dunes and I pretend I’m a giant striding among them. On such a day, it’s easy to find good seashell specimens to take home because except for the most diehard of shell and shark tooth hunters who prowl the beach in hunched over postures, most folk eschew the beach on days like these. I pick up huge cockle shells and arcs, some as big as my hand and in varying hues. The winter brings the pen clam shells – dull, greenish brown on top but shining like an oil sheen when wet. I find angels wings, whiter than a saint’s soul and as flimsy as a fading summer daydream. Black oyster shells worn glossy smooth by whatever artists toil beneath the waves, some of them so intricate they looked like shellac masks from a medieval ball.

On the way back, I come upon a large scattering of angels wings, most of them broken, as if shed hastily by the angels who wore them, and I’m reminded of the final verse of Raglan Road, an old Irish song I love: “For I have wooed, not as I should, a creature made of clay. When an angel woos the clay he’ll lose, his wings at the dawn of the day.”

I walk on to the car with my hands in my pockets, happy that I thought to wear a bulky sweatshirt. Harley runs ahead of me, cavorting and anointing. And I can’t help but wondering about all those angels that fell in love with mortals and lost their delicate and broken wings on a cold beach in their passing. I lick the taste of the wintering ocean’s kiss from my lips and head home.