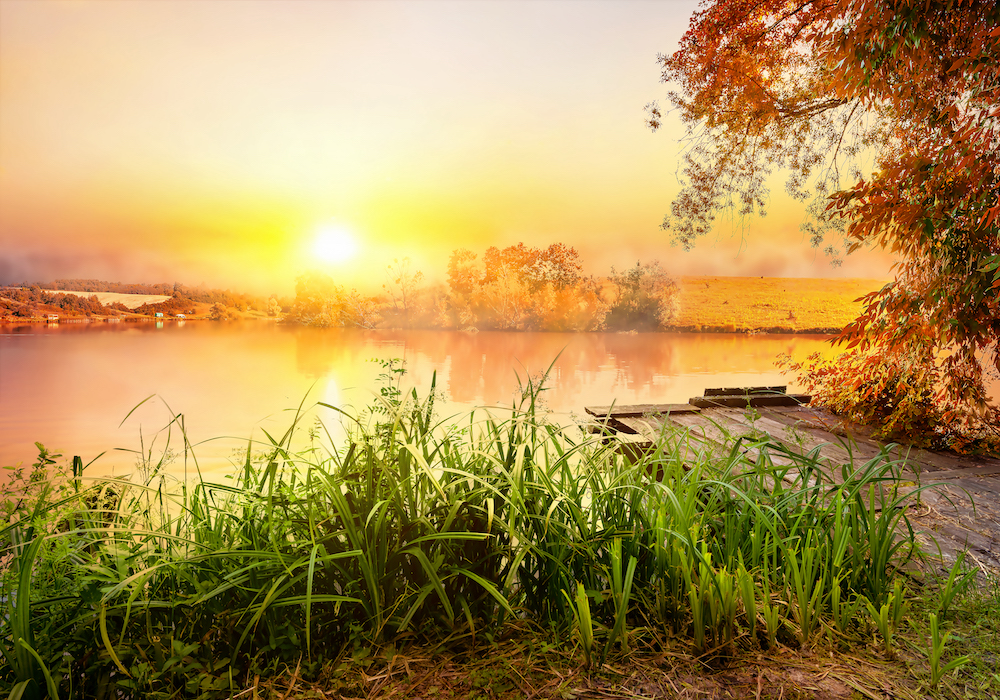 One of my favorite musical arrangements has always been Handel’s Messiah. Years ago, I sang in a church choir that performed it every year at Christmas Eve mass. It was a thrill hearing all the finely intermeshed voices working their way to the soul-stirring and dramatic part of the arrangement we all know as the Hallelujah Chorus, which extols the risen Christ’s victory over death. It gives me goosebumps when I put my vinyl album of it on the turntable every year during the Christmas holiday season.

But we here in these parts are in the midst of another kind of Hallelujah Chorus. Just as Handel’s masterpiece is the coda to “Messiah,” the frenetic and escalating chorus of cicadas, crickets, and frogs offering up their rendition of it is the coda to the final days of summer, which are ebbing as surely and methodically as the tides. Like “Messiah,” it’s all part of the cycle of life, death, promise, and fruition which is celebrated by the inexorable march of the seasons.

My wife and I are fortunate enough to live next to a marsh and tidal creek on our little island home here in the low country of Florida. Our little neighborhood abounds with oak trees, some of them as old as our nation. Our back deck is like a symphony hall this time of the year. Each season has its own sound. Autumn happens to be my favorite. The songs of finch, sparrow, cardinal, and wren seem more insistent and emotional as the dog days of summer slink off toward their wintertime kennels.

The quorking sounds made by Great Blue Herons that stalk the shallows of the marsh and creek, sometimes until after dark, will cease once the damp and chilling nor’easter season lays its cold hands on us again. But for now, it’s all about celebration, the grand wedding feast after the wedding, after which the musicians will decamp and the hall will fall silent for a while. But in the meantime, every living thing that’s able to sing a song of late summer and early fall.

In addition to my love for the imagery and majesty of all these creatures, I’ve also had a love affair dating back to childhood with the lowly cicada, which we called locusts when I was a child. The thumb-sized, iridescent-winged creature is born, mates and dies in short order, playing its own funeral dirge as its abbreviated life flashes by.

Though not a large creature, its valediction rivals that of a chainsaw in the volume it produces. And as the summer edges into autumn, it becomes more insistent with each passing day. But unless you’re paying close attention to them, their trilling sounds like one mad skirling of legions of bagpipers. Only when you sit quietly and really focus, you’ll notice that it’s not a uniform sound at all.

All of which brings us back to the Hallelujah Chorus. Those who are familiar with it hear distinctly its rapidly growing and unrelenting melody. But there’s more to it than meets the eye, or, better yet, the ear. For if you really open your ears and listen to it, you will notice that it’s a lyrical revolving door of voices ranging from bass to soprano, constantly entering and departing so seamlessly and with such precision that it gives the illusion of all one voice.

And thus it is with the katydids, cicadas, tree frogs, crickets, peepers, and all the other creatures that, when woven together, create such a seamless tapestry of sound that it all seems like one garment unless you stop, silence your mind to other earthly and mental distractions and pick apart the numerous, intricately woven threads. It ends in a stirring crescendo signaling the close of the day, and the impending shift of the seasons.

As darkness cloaks the marshes with its meadows of spartina grass, now taking on the hue of wheat ready to be harvested, the glens, forests, and pastures, only the tree frogs, katydids, and crickets remain in the great hall at night, singing their drowsy, sleep-inducing lullabies.

We live in a grand symphony hall where every arrangement is an opus rendered by the loving hands of the grandmasters of the art. Whether their instruments are played by the fluttering of wings, the rubbing together of spiny legs, or the contracting air sacs in their thoraxes, they are the composers and musicians of nature. We’re merely their captive audience/