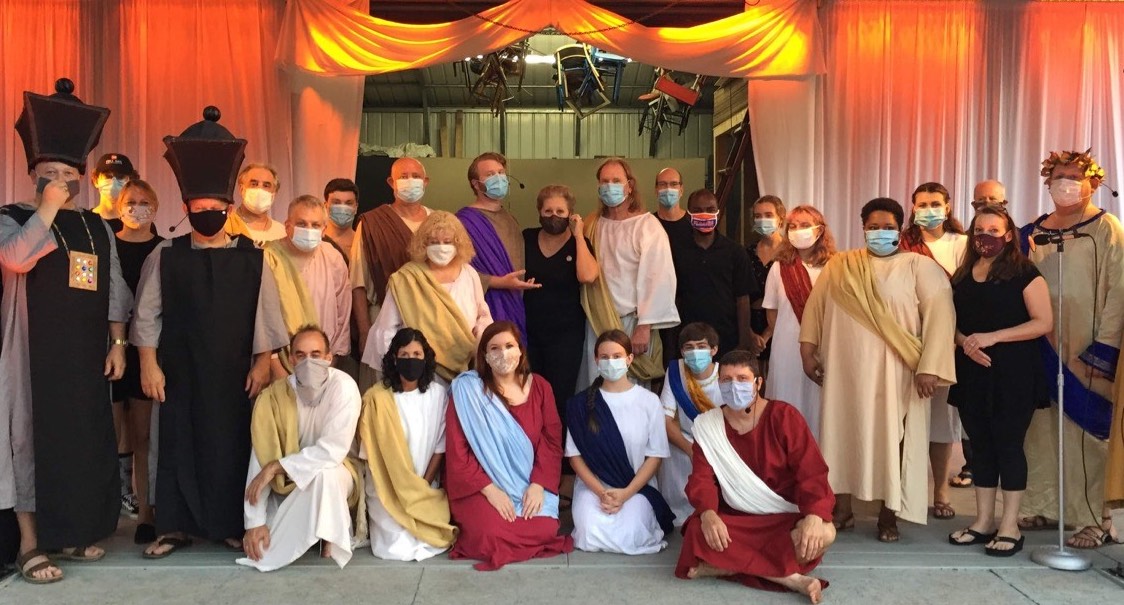 My favorite two Broadway shows have always be HAIR and Jesus Christ Superstar. I came of age in the rock-saturated 1960s and 1970s. When both the above albums were released, I bought them. I still have them. Although their cover jackets are beaten up and held together with tape, the vinyl within remains pristine. I still play them. I still sing along. I still know most of the words by heart. My fantasy has always been to have a role in either one or both of them. But what are the chances, right?

Late one evening in December 2018, I got a Facebook message from the owner/director of Amelia Musical Playhouse, a local theater company where I’ve done some acting. All members of AMP, as we call it, are volunteers – cast, musical pit, stage crew and lights crew. The question I got from Jill Dillingham was straight and to the point: “How would you like a part in Jesus Christ Superstar? We’re doing it for three weeks in April. Rehearsals start in January.” I couldn’t reply fast enough: “Are you freaking kidding me? It’s been my dream!”

I landed the part of Peter, the Apostle. The rest of the cast that got chosen for the roles of Jesus, Pilate, Judas and Mary Magdalene, and even the minor roles and chorus, were amazing. Their talent was almost unbelievable. It was such an honor being onstage with them. Getting to sing the plaintive duet, “Could We Start Again, Please?” with the actress who portrayed Mary Magdalene was bittersweet, especially having come right on the heels of Peter’s screaming denial that he even knew who Jesus was, followed by Mary’s gentle chiding of Peter for having done so.

By the time the show opened after three months of sometimes grueling, yet loaded with fun and silly antics rehearsals, we were a well-oiled machine. Every show went off without a hitch to a sold out auditorium every night. A couple of years before, I’d seen the show put on by a large company in Jacksonville, Florida. Although on a smaller scale and working with an entirely volunteer company, I think ours was on a par with it. And from comments we heard from other folk who’d seen the Jacksonville production, so did a lot of other people. But best of all, it was like going to a rock concert every night with all your friends. The atmosphere and chemistry among the cast was electrified. We couldn’t wait for the final show.

One of the show’s big hits with the audience was the Last Supper scene that opened Act II. Crew members and stage setters had built a long table with a faux , rumpled table cloth. Before the curtain opened, Jesus and all the Apostles took their seats at a table covered with plates and wineglasses. All of us assumed the positions of Jesus and all the Apostles depicted in Leonardo da Vinci’s famous painting, The Last Supper. Every night when the curtain rose on that scene, we had to wait a few moments for the laughter, applause and photograph taking to stop before launching into the comical number, “The Apostles Song.” By the third time we’d sang it at the end, all of us, except Jesus and Judas, were merrily “drunk” and slurring our way through the lyrics.

Jill isn’t a fan of reprising shows. The exception being Rocky Horror near Halloween and Scrooge in December. But this time, she decided to make an exception. The show had been so popular that a reprise was demanded. We were ecstatic. It was only going to be a short, three day run leading up to Easter this year, but we still couldn’t wait to do it. Rehearsals were set to begin in late January. Almost the entire cast was coming back. That first rehearsal or two was like a family reunion. Most of us remembered our parts and routines, which made it even more fun.

And then Covid-19 came along and put an end to it all. No more practices because indoor activities, especially on a crowded stage, would be foolhardy. Plus, for awhile here in Florida, all such activities indoors or even outdoors were banned. The word deflated doesn’t even come close to how we felt. Jill kept pushing back the date. But that date would come and go and have to be pushed back again. We were running out of time. The professional version of the show is set to go on the road again in the early fall. Once that happens, any performances of it by other groups is barred by the contract. Bummer, dude. We thought that was it but we kept praying we’d somehow find a way.

And then it happened. What about a performance outside under the stars? We could practice social distancing and even wear masks, which would add even a little more comic relief. Jill’s husband, Greg and some of the crew set about building a large outdoor stage, lights, pit and all, not only for Jesus Christ Superstar but other shows for the time being. Two weeks ago, we opened to a packed “house” in the big lot behind the theater. All week long, we’d been besieged by violent thunderstorms. There seemed to be no end in sight. Strangely enough, the skies always cleared just before final dress rehearsals. We crossed our fingers and held our breaths. Some prayed for cloudless skies with the moon shining down. I prayed for rain because, in Florida, if you pray for sunshine you generally get the opposite.

So, we defied the odds and held an open dress rehearsal for anyone who wished to attend. The turnout was wonderful. On Friday and Saturday nights, for the regular shows, had we been inside, we would’ve almost packed the house. Not a bit of rain on either show, although one evening it stopped not long before the show started.

The Covid-19 pandemic has brought a new reality to the lives of us all. The stage on which we live has been radically altered. An entire world that for thousands of years has done things one way for the most part, has had to learn to do things another way, and oftentimes, in radically different ways. The human touch and intimacy upon which we thrive as social creatures, has been squelched. The new normal is six-feet apart, masks and no hugging or touching except among close family members, and sometimes not even then. The handshake has been replaced, when it happens at all, by the elbow bump.

Worst of all, the stress and strain is starting to get to us. We weren’t meant to be solitary creatures. Regardless of one’s views about evolution of the species, we’re herd animals. That’s for a reason. There’s safety in numbers. But no longer. Now it’s the herd that the predator turns its attention to and runs amok in. The solitary members are safer. We find ourselves bewildered and depressed. Anxious. And yes, even angry. How long will this go on? When will we be able to return to normalcy? What kind of lasting effect with this terrible plague have on us as human beings and social creatures?

We don’t have the answers to any of this. We can only guess with the best advice modern medicine has to offer. In the meantime, every day finds us praying for sunshine. For relief. For the comforting reassurance of the human touch – the embrace of those we love and cherish. Every day finds us pining for a do-over. Just like Mary Magdalene and Peter did in Jesus Christ Superstar.

Could we start again, please?