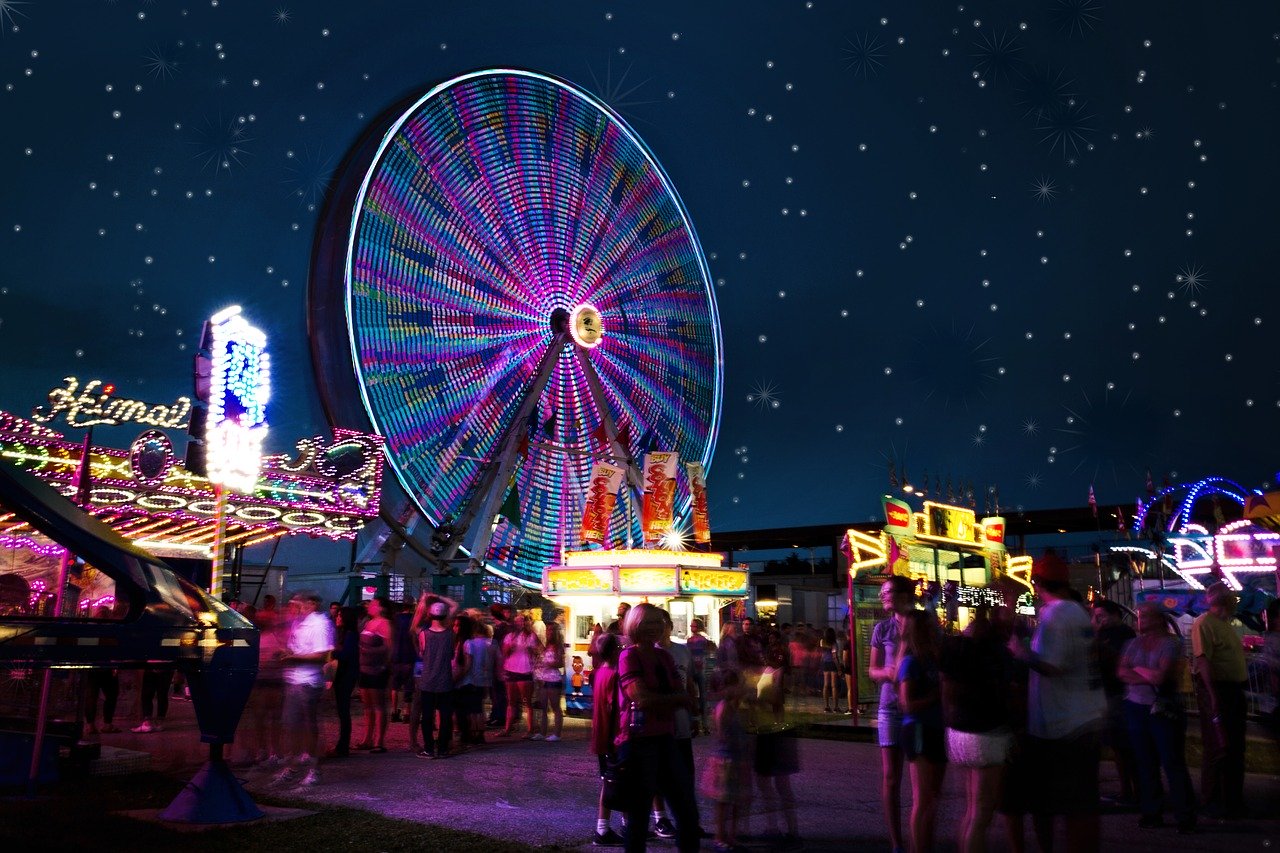 I was chatting on Facebook messenger with an old high school friend a couple of days ago about the golden era of our youth. It put me in a nostalgic frame of mind about childhood and teenage events that are worth remembering. One of them, in particular, is a standout because, fifty-two years later, I still can’t think about it without laughing.

A fair came to my little hometown every year in the fall, just as the evenings were starting to get that apple crisp feel to the air. The smell of candied apples, cotton candy and various other goodies frying in vats of grease permeated the air with scents that still make my mouth water.

We rode the double Ferris wheel with our girlfriends and clumsily made out when the cars stalled at the top as the operator paused it to let on more passengers below. We hooted like crazy people as we crashed into each other headlong in the bumper cars. And some of us puked our toenails up riding an insane contraption call “The Zipper,” which was as high as a single Ferris wheel but flipped you upside down and in mad circles as it hurtled around its course. Afterward, the ride operators collected all the change than fell from everyone’s pockets onto the canvas tarp beneath the ride.

We tried our hands at the games of chance operated by sketchy looking men and women who knew a rube when they saw one but who had no qualms about taking your last dime while you tried, in vain, to win your gal the five-foot tall pink panther.

But there was one attraction tucked away in a dimly lit corner of the fairground, known colloquially as “the hootchie-cootchie show.” There was always a throng of grinning men crowded around it as the barker titillated the crowd- a word that best describes the goings on inside that grubby tent – with wild tales about Hawaiian princesses and other exotic “ladies” who would get “bare nekkid” and show all for any man not too shy to ante up his four bits and step inside.

Raging hormonal teenage boys who were spotted in the leering crowd were chased away by deputies and roustabouts. As we stood safely away and watched the men come out after each show and noting their even bigger grins and shoulder slapping, we schemed ways to get inside. Alas, we could never sneak past the watchful eyes of the authorities as we tried to just blend in with the men herding into the tent and we yearned for the day we turned eighteen and could gain admittance.

One afternoon when the fair was in town and we were fourteen years old, a group of us were playing a game of sand lot baseball on a vacant lot in our neighborhood when one of our buddies, whom I’ll just call Johnny B, began blabbering about the hootchie-cootchie show, where women got “butt naked and even showed their lady parts.”

Now, Johnny, who was known to be an aisle short in the smarts department, told us this as if it were some divine revelation he’d just been given. After a few moments, he finally got his wits back enough to go on with his story. Johnny had an older brother named Earl who was a hood, as we called young ne’er do wells back then. The night before, Johnny B heard Earl bragging and haw-hawing with their drunkard and frequent jailbird of a father how he’d managed to sneak into the hootchie-cootchie show with his best friend that night, where they got to see the starring actress, billed as “Hawaiian Princess Lilly Lukianii.”

The plot involved passing two pints of Red Hurricane wine – a fearsome concoction that could turn a meek country preacher into a raving whirlwind of debauchery – to the toothless, tattooed man who guarded the rear of the tent against those who tried to slip in under the flap under cover of darkness. Properly bribed, the old wino would pretend not to notice.

” And guess what, y’all?” Johnny B confided. “Earl has a few bottles of Red Hurricane stashed in the garage. We could pilfer ’em and he’d never know!”

Early that evening, when Earl and his buddies piled into his old beat-up Chevy and went off for a night of cruising the Dairy Queen and Burger Chef parking lots to terrorize other guys and try to pick up girls, we swiped the wine and off to the fair we went.

The plan worked like a champ. “You kids get caught, I don’t know nothin’,” the already drunk rearguard told us as we handed him the contraband. We slithered under the tent flap and into the semi darkness and immediately recognized some of the town’s finest and most respected gentlemen. We crouched low in the back of all the men in the tent, which reeked of bourbon, aftershave and cigars, and waited for the show to start.

Moments later, the barker came out and announced that after a brief warm-up act from a couple of other “fine looking ladies,” the star of the show would perform. A few minutes later, Princess Lilly Lukianii sashayed on stage in a red silk robe, strutted around amidst hoots and whistles and proceeded to disrobe. She was tall, lanky, and blessed with the biggest bosoms I’d ever seen.

And then Johnny B spoiled it all. Incapable of anything softer than a whisper in a sawmill, he brayed out his dismay for all and sundry to hear: “God a’mighty! That ain’t no High-Waiian Princess, y’all! That’s one a them trashy boopsy gals that lives down yonder behind the cannery. My diddy says they’re looser than the wheels on a Piggly Wiggly buggy!”

And just like that, Deputy Tom appeared and shined his huge flashlight in our faces, mentally registering each and every one of us by name, address and phone number, and worse, parents’ names. One of my buddies bolted and slithered like a rat snake under the tent flap, vanishing into the night, howling like a siren.

Deputy Tom studied our stricken faces and smiled. “Boys,” he said. “Looks like we’ve got ourselves a little standoff here. Now, think real hard and tell me, who was it y’all saw here tonight? “

“Nobody, Deputy Tom,” we said in unison, catching his drift. “We wasn’t even here.”

We turned around and slid beneath the flap and fled in terror. I’m sixty-six and I still haven’t squealed on those men. But I’ll tell you one thing. Folks would be real surprised if they knew who some of Princess Lilly Lukianii’s admirers that night were. And rumor has it, one of them never again took off his glasses except when he went to bed at night.